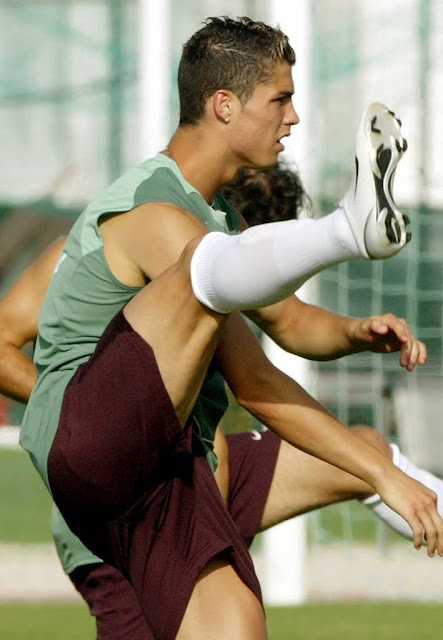 Sexy Men of Sports has a new entry called
"Muscular Thighs of Cristiano Ronaldo."
What's not to like about that?
Views as of now: 233,546
Posted by Mike Ellis, The Jolly Reprobate at 9:02 AM 1 comment:

A SEASON OF COMFORTABLE SHOES

Okay, so while I work tonight, I'm gearing up for a marathon viewing of Season 2 of TRUE BLOOD, which I haven't seen yet.

And please, God, somebody bite this boy already. He ain't gettin' any fresher. 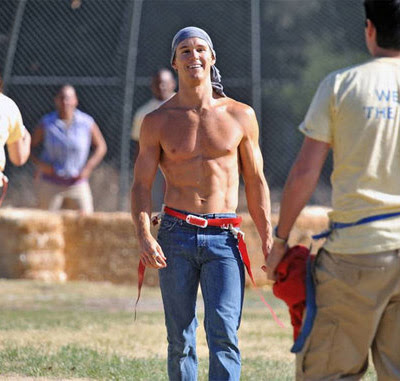 Seriously, who would brag about this? 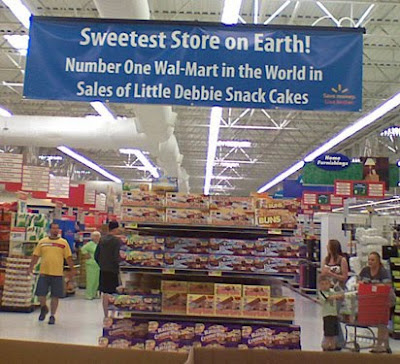 7TH INNING STRETCH OF THE IMAGINATION

Oh, one never knows what one will find on the Internet.

Like researching something from the USA Department of Transportation and finding a photograph of the the Jonas Brothers in baseball uniforms.

No, really! See for yourself... 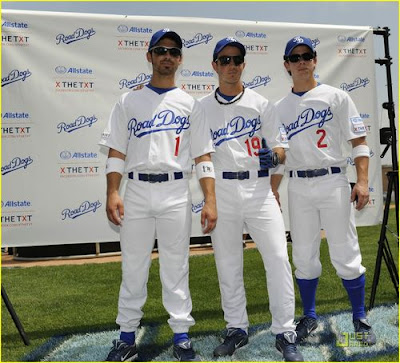 I like that Nick is wearing the old-fashioned
knee pants, and I wonder why Kevin is #19.
I mean: they could just as easily been 1, 2,
and 3. But kudos to the middle child for
finally getting to be #1.

By the way, do you think Joe might actually
be wearing a cup? Or is that all him?

When I was labeling this entry, I toyed with the idea of adding "athletes" because I thought that anyone searching for such a topic might want to see this photo. But I didn't, because without knowing whether they can actually play or not, I was hesitant to call them "athletes."

Then I remembered what kind of saccharine, Archies crap they play, and I was hesitant to call them "musicians" either.

And finally, somebody made hot-looking vampires.

TWILIGHT was a big disappointment in this respect. Peter Facinelli has a great face and Kellan Lutz has a killer body, but in general the vampires in those movies are odd and sickly looking. The werewolves are hotter, but not exactly pretty.

And TRUE BLOOD disappointed me, too. I've only seen Season 1 so far, but only Ryan Kwanten is worth looking at (and thank IFITS that Kwanten shows his ass to us as often as he does) and all the trashy accents really get on my nerves after a while.

But Vampire Diaries has a nice dish of testosterone-flavoured eye candy in its cast, and they speak English without a poor white trash accent or the constant Cullen pausing. Here's a sample. 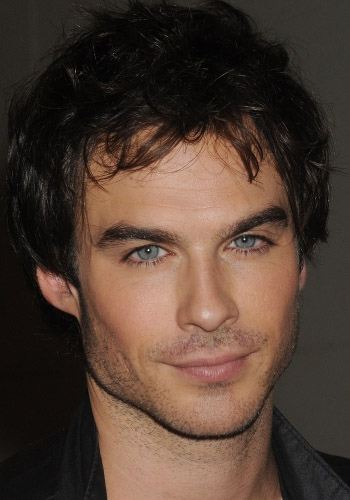 Ian Somerhalder. His character is the snarky
smartass who makes the show worth watching.
Not that blue-eyed brunets really need to talk. 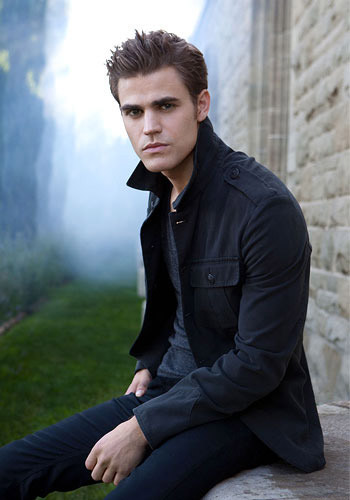 Paul Wesley. Great body and really sexy, but not
what I'd call beautiful. If his eyes were any closer
to his brows, he wouldn't need an eye lid at all. 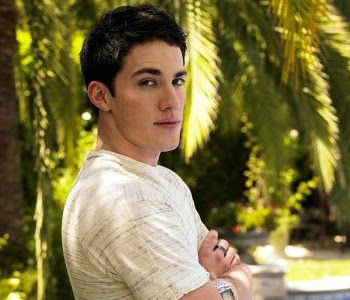 Michael Trevino. It's hard to find a photo that does
him justice, but on video he looks really, really good.
And vampires aren't the only kind of
blood-suckers that he's been dealing with. 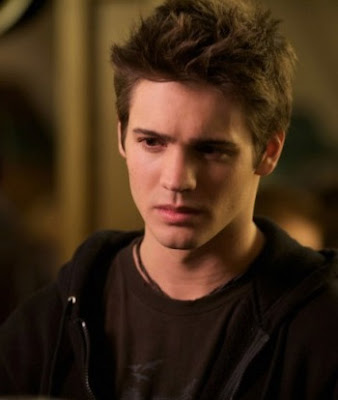 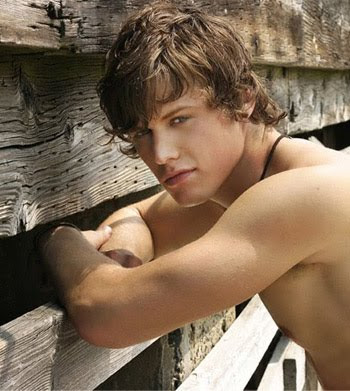 Zach Roerig. I never saw this guy on Friday Night Lights,
but he makes a really sweet "All-American Boy" on this show.
With all the vampires, witches, and werewolves, it's kinda
refreshing to have a guy who's just an ordinary stud.

And one last photo to drive home the fact that these are not
the goody-goody Mormon vampires of TWILIGHT. 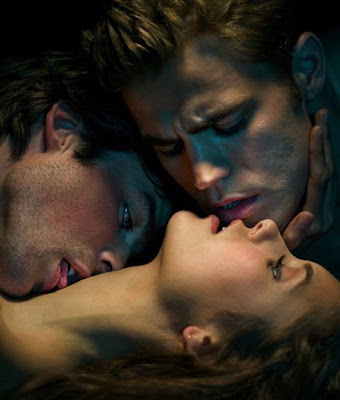 COMMENTS:
Xersex said...
Ian Somerhalder: the colour of his eyes is incredibly beautiful and he has a nice face.
Paul Wesley: Great body and really sexy, but not what I'd call beautiful. I agree with you.
Michael Trevino: cute, nice face, but not much more.
Steven R. McQueen: nice face, in this photo he looks very young.
Zach Roerig: he looks like Belami guys (August 13, 2010 1:10 AM)

Kenneth Johnson aka Sebastien Penn said...
Ian plays his character really well. In truth, I prefer him younger than how he looks now.
Paul is the reason I got interested in this series. Boring character, but his screen presence is magnifique.
Michael looks nice but his douchey character makes him hard to like.
Steven gets cuter by the episode; when he has long hair...swoon!
Zach's FNL character was double douche; he plays a really likable character. If I couldn't get Paul, I'd date Zach. (August 13, 2010 2:17 AM)
Posted by Mike Ellis, The Jolly Reprobate at 9:52 PM 2 comments:

Here's a lovely clip of the even more lovely Simon Nessman.

You may thank me now.

Like summer itself, this boy is
simultaneously very hot and very cool.
Views as of now: 232,926

Yea! Two comments! Now I can post again right away!

Xersex said...
Hot cool and marvelllus, dear Mike. He's among my favourites models, with Noah Mills, Francisco Lacowski, Tyson Ballou, and the greatest of all: Evandro Soldati. I consider your video on Simon Nessman as a Man of the Month for August! (August 13, 2010 1:05 AM)
Posted by Mike Ellis, The Jolly Reprobate at 12:56 PM 3 comments:

River Viiperi has posed for a lot of photographers, but the snaps he takes of himself are kinda cute, too.

For the first four months of 2010, River had a weblog called Never Back Down. He never really posted very much, and what I've seen of it is mostly photographs with very few words. But it is cute and gives you some insight into the boy's very busy life modeling. 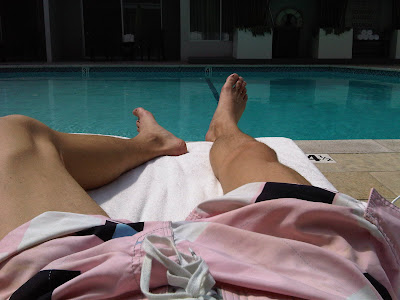 TEQUILA WITH A DASH OF TRIPLE ZAC

Meanwhile, in the lab, our cloning research continues.

Please don't ask how we got this guy's DNA. 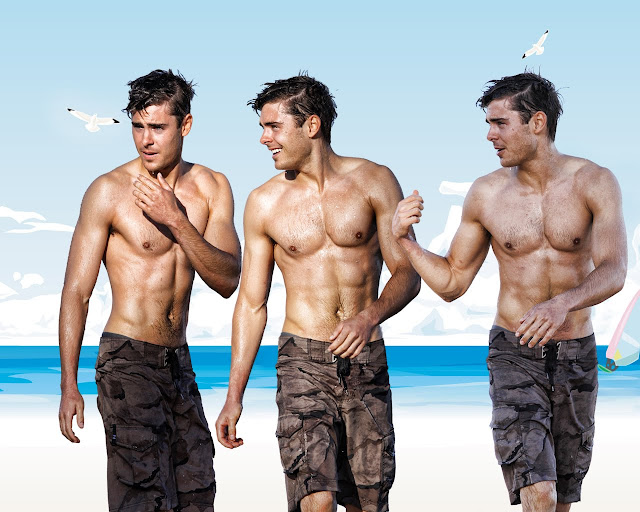 Physically, the cloning of Zac Efron has been a success,
but we've been unable to complete the psych evaluations.
Apparently these guys just want to talk to each other.
Photo stolen from
Sexy Wall of Amazing Guys
Hits as of now: 231,654
Posted by Mike Ellis, The Jolly Reprobate at 7:08 AM 2 comments:

WHO IS THIS GUY?